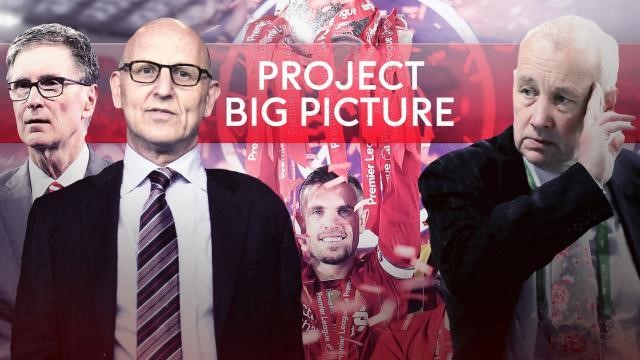 The "Project Big Picture", which has been buzzing recently, has ushered in the final result.

From a certain point of view, this result is not unexpected. Such a radical reform plan is destined to be opposed by the league, the FA, the media and fans. But as the proponents of the proposal, Liverpool and Manchester United, why would they also stand on the side of the opponents at the shareholders meeting and accept a result that will not be supported?

Because they know that the end result can only be like this.

Although there are many contents in the Big Picture Project, the purpose behind it is very clear.

First of all, in the case of a sudden drop in the income of the low-level leagues due to the epidemic, the plan proposes to inject 350 million pounds into the FA and the EFL (Football League) to which the English Championship, League One and League Two belong to provide special funds for the women's football league. 25% of the Premier League’s revenue is paid to the EFL. This condition is undoubtedly good news for the lack of income, especially the EFL, which is getting worse now, and thus pulls EFL chairman Rick Parli into the camp of supporters.

On this basis, nine teams that have never been relegated will become the "talkers" of the Premier League. Major decisions only need six of them, which is the same as before, reaching two-thirds of the share. Passed; In addition, the pressure of the game was greatly reduced, the League Cup and the Community Shield were cancelled, and the Premier League teams were reduced from 20 to 18. Finally, the time for players to rest was increased, pre-season preparations were extended, and the opening of the season was postponed.

In the past few years, Liverpool coach Klopp has complained on many occasions that the Premier League schedule is too stressful and the players have too little rest time. Especially in the last season and this season affected by the virus, the players have been equivalent to spinning for nearly 14 months. As the European Cup is postponed to next summer, this rhythm will continue for a long time.

In view of this, in fact, many rich coaches have the same feeling. The Premier League’s strong teams compete all year round. Not only do they have to participate in the tasteless League Cup and the Community Shield, but there is no Christmas-New Year holiday. This year’s winter break, which is hard to come by this year, is expected to be a waste next year.

So, when the epidemic made the low-level league unsustainable, investors in Liverpool and Manchester United put forward their plans and exposed their dissatisfaction and hopes to the face through media exposure.

In a way, this has achieved their goal.

Because of the extreme strength of conservatism, Britain has always been unable to accept radical reforms.

Whether it is in football, politics, or economics, Britain has a natural fear and fear of radical reforms. Even if this kind of problem first appears in Britain, it is difficult for them to take a bold first step. Such thoughts are sometimes criticized by the outside world as stubborn and sometimes praised by the outside world as sticking to traditions, depending on the results of radical reforms in other countries.

In the football world, this is vividly reflected. In 2010, England suffered a goal line injustice at the World Cup in South Africa. However, as early as 2005, many companies developed stable and effective goal line technology, but even so, the Premier League will have to wait until FIFA in the Club World Cup and other matches. After the positive result, it was announced that the goal line technique would be used in the following season.

Compared with the technically less difficult door line technology, the application of the VAR system in the Premier League has experienced repeated ups and downs.

In the 17-18 season, Bundesliga and Serie A took the lead in using VAR technology; in the following season, La Liga and Ligue 1 also took this step. But on the other hand, the Premier League, which has the highest level of attention and a lot of controversial penalties, only tweaked in the League Cup and the FA Cup in the 2018-19 season.

"From the application of VAR in the FA Cup and League Cup, as well as other leagues in the world, we have conducted key learning and detailed discussions."

After all the calls came out, the Premier League used VAR technology in the 19-20 season, but in order to ensure the smoothness of their most important game, the referees rarely take the initiative to check the replay, which means that there are two referees and two sets of penalties on the court. Standards, resulting in more disputes and penalties.

A set of VAR is still so, let alone such a radical reform plan.

Although they promised financial support, Liverpool and Manchester United pulled the EFL chairman to their side. But at the Premier League level, depriving a large number of small and medium-sized clubs of voting rights is destined to not receive widespread support.

It is said that the nine clubs have become the talkers, but Everton, West Ham United and Southampton are very clear that when faced with differences between the rich and the mid-lower teams, even if these three vote against it, they will not be able to stop it by then. The collective actions of the giants, such as the voting for the number of substitutions at the beginning of the season, if it were not for the collective opposition of the middle and lower teams, everyone would still be able to change five people this season.

In this way, the results of this plan are ready to come out.

In fact, investors in Liverpool and Manchester United also know this very well.

"For example, if you say that this room is too dark, you must open a window here. Everyone must not allow it. But if you advocate removing the roof, they will come to reconcile and open the window."

Mr. Lu Xun’s words are applicable everywhere. Reducing the pressure of the game and increasing the rest time. These two points have been said countless times by the giants in the past few years, but the FA and the Premier League are just minor repairs. Today the rematch will be cancelled and the overtime will be cancelled tomorrow. It seems that Concessions are not small, but the pressure on the giants' schedule has not been alleviated.

Since "opening the window" can't get support, it simply proposes "removing the roof". Although in the process received a lot of scolding and was also labeled "turning the Premier League into the NBA", the managers finally took action.

"At today's conference, the parties also agreed to provide a rescue plan to ensure that the League One and League Two clubs will not go bankrupt due to the financial impact of COVID-19 and can successfully complete the 2020/21 season."

"Furthermore, the Premier League shareholders agreed to use the 20 clubs as a group to cooperate on the future structure and financing of English football and negotiate with all stakeholders to ensure a vibrant, competitive and sustainable football. Pyramid. The clubs will work together in an open and transparent manner, focusing on the structure, schedule, management and financial sustainability of the league."

The official announcement of the Premier League basically appeased all the promoters of the big picture plan.

The EFL has received support funds, and the giants have also received guarantees for future discussions on the "league structure, schedule, management and financial sustainability."

In this case, Liverpool and Manchester United have also used the donkey to sell the Premier League and make a gesture of "20 teams unanimously".

As for "withdrawing from the Premier League" and "participating in the European League", they are all tricks. Agnelli has been clamoring for the "European League" for so many years, but it is also forcing UEFA to make reforms. It is all the same.

Liverpool and Manchester United are just stealing a trick from Agnelli.